What router is worth buying, WiFi6 has better performance th

In recent years, WiFi6 technology has been vigorously promoted by mobile phone and computer manufacturers, just like the replacement of game consoles. As the price of WiFi6 routers drops, routers have also entered the next era of WiFi6. After learning that PS5 also supports WiFi6, the student just paid a PS5 deposit to take this opportunity to update the router at home! Nowadays, computers, mobile phones and other devices at home already support WiFi6. Recently, I paid a deposit for Sony PS5, which also supports WiFi6.

As mentioned in several articles before, the house bought by the student has been handed over. In addition to the furniture and appliances used in daily life, of course the router is also essential. So there is an idea to upgrade the router. The apartment type of the student's home is more awkward, and it is known as the long apartment type of router killer. Install only one router, no matter where it is placed, there will always be signal blind spots. If you buy a signal amplifier, you need to switch WiFi networks frequently when you move around the house, and it is inevitable that the signal will be unstable or dropped. 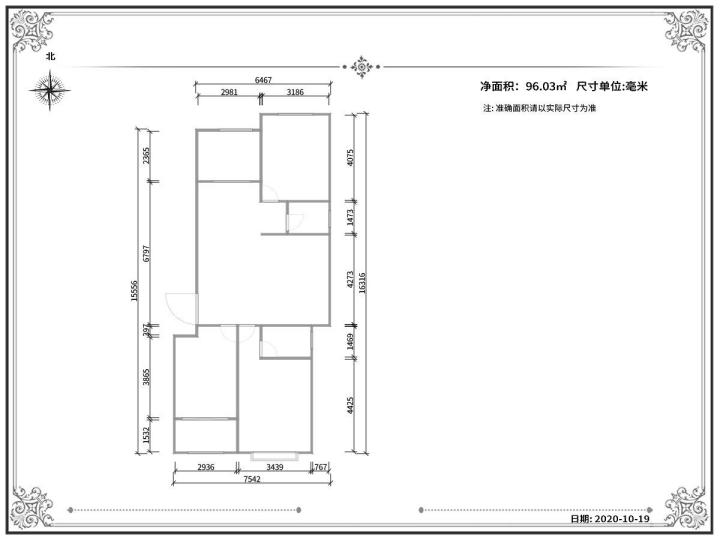 I want a WiFi6 router and I want the signal to cover the entire room. How to solve it? The answer is WiFi6 Mesh networking! Just as I was struggling with which one to choose, Aunt Zhang's precise push, 360 WiFi6 whole house routing, more than 500 pieces of two WiFi6, mesh routers, decisively rushed! Aunt Zhang is so fragrant! Fighting Xixi is really fragrant! 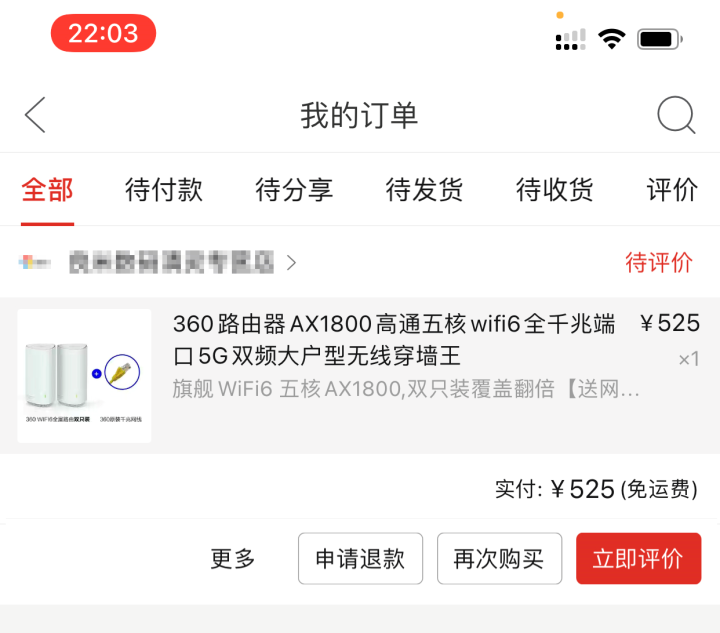 Let me briefly talk about what WiFi 6 is. I don't know when you heard the word WiFi 6 since I learned about it at the beginning of this year, so I have a keen interest in this new wireless technology. In fact, WiFi6 is the sixth-generation wireless technology-IEEE 802.11ax. You may be familiar with this 802.11. In fact, whether it is WiFi6 or the more popular WiFi4 and WiFi5, the protocol starts with 802.11, and the institute of Electrical and Electronics Engineers (IEEE) who developed this protocol is from After the introduction of the world’s first wireless LAN standard IEEE 802.11 in 1997, the number string of 802.11 has been used today. The reason for using this string of numbers is that the IEEE subordinate working group that developed the standard is the 802.11 working group. Each generation has been named after that. It is to add letter suffixes on the basis of reserved numbers: 802.11a, 802.11b, 802.11g, 802.11n, 802.11ac, etc., as follows:

The first is speed and delay. The transmission rate of WiFi6 can reach up to 9.6Gbps, which means that the theoretical transmission speed has reached a transmission speed of 1.2GB/s, which is 40% faster than the previous generation! At the same time, the average delay is reduced from 30ms of WiFi5 to 20ms. In addition, WiFi6 also has two major technologies added, uplink and downlink MU-MIMO and OFDMA. MU-MIMO, multi-user-multiple-input and multiple-output, as the name implies, is that the router can communicate with multiple devices at the same time. This technology is upgraded on the basis of WiFi5's simple downlink MU-MIMO. When uploading and downloading, the router is It can transmit data with more devices at the same time, thereby improving network utilization and improving network congestion.

And OFDMA (orthogonal frequency division multiple access) is an orthogonal frequency division multiple access technology. In the past, when sending data to multiple devices at the same time under the same network, users would occupy the entire channel, which resulted in queuing when multiple devices were transmitting. Data conflicts, resulting in a worsening of the network environment and higher latency. In OFDMA, users only occupy a subset of sub-carriers within a specified time, that is, the team becomes more teams, private cars become buses, and data is transmitted to multiple users at the same time each time, which avoids network congestion , The more the number of devices, the more obvious the effect will be.

What is Mesh networking?

The high-speed 5GHz frequency band has weak ability to penetrate walls, and 2.4GHz is slow. In order to solve this problem, mesh is needed. The so-called mesh is the mesh network topology and is an evolution of ordinary relay routers. The mesh networking operation is relatively simple, and the optimal network environment can be dynamically constructed according to the number of nodes and network conditions, and the placement of nodes can be adjusted according to the actual indoor conditions such as the house type to form a star, chain or daisy-shaped network , So that the equipment in the network can have the best signal coverage and speed at any position. And mesh can realize seamless switching between different routers, and this experience is very cool. 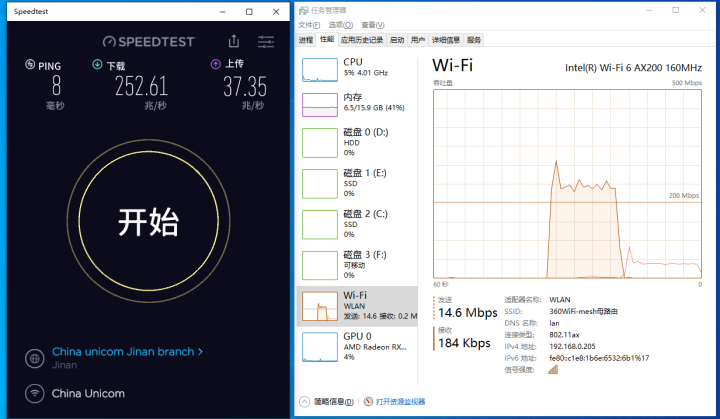 Then the iPhone 11 Pro Max, which also supports WiFi6, is connected to the 360 ​​router's WiFi. The final result shows that the download speed is 218Mbps, the upload is 36.1Mbps, the delay is 9ms, and the score is slightly weaker than the AX200.

Then there are two devices that do not support WiFi6. The first is Samsung Note8, connected to a 360 router, download speed 229Mbps, upload 36Mbps, delay 7ms, although the phone does not support WiFi6, but the network speed performance under this WiFi6 router is still very good. 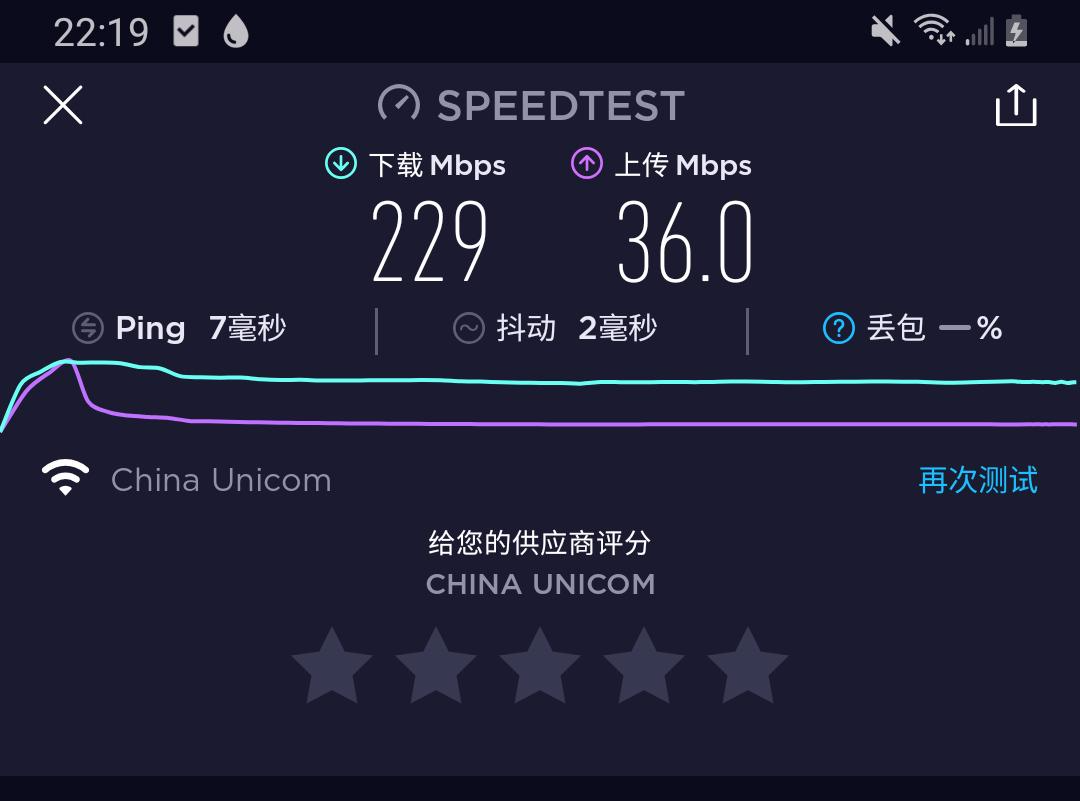 The MacBook Pro 13 downloads 249Mbps, uploads 35.6Mbps, and the delay is 7ms. The same MacBook Pro that only supports WiFi5 can almost reach the full speed under the 360 ​​router. 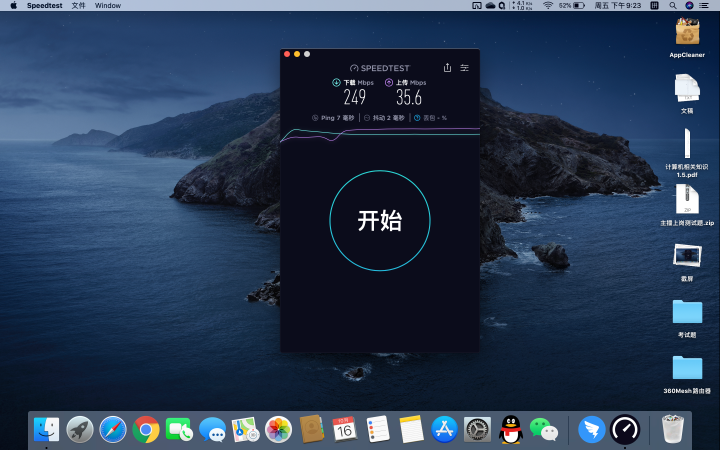 Then there is a read and write test of a wired connection QNAP TS551 NAS. The speed is 63MB/s. The transmission speed is limited by the speed of the mechanical hard disk. The router said that it does not carry this pot.

In summary, the 360WiFi6 router can make the broadband at home basically full, and regardless of whether the device supports WiFi6 or not, you can have a faster Internet speed experience.

Next is the comparison between the download and upload speed of the 360WiFi6 router and the old router at home. Through the following content, you can intuitively see the gap between WiFi5 and WiFi6. In the same test environment, the download speed of the Intel AX200 network card (supporting WiFi6) connected to the 360 ​​router is 252.61Mbps, the old router is 24.33Mbps; the upload is 37.25Mbps and 24.54Mbps; the delay is 8ms and 7ms, respectively. From the results, we can see that the AX200 has a huge improvement under the 360 ​​router.

Then there is the traditional mobile phone Samsung Note8 (does not support WiFi6). The comparison results of the old and new routers are: download 229Mbps-30.9Mbps, upload 36Mbps-39.9Mbps, delay 7ms-10ms, although the device does not support WiFi6, but under the 360 ​​router, the network speed It is also far beyond the old router. 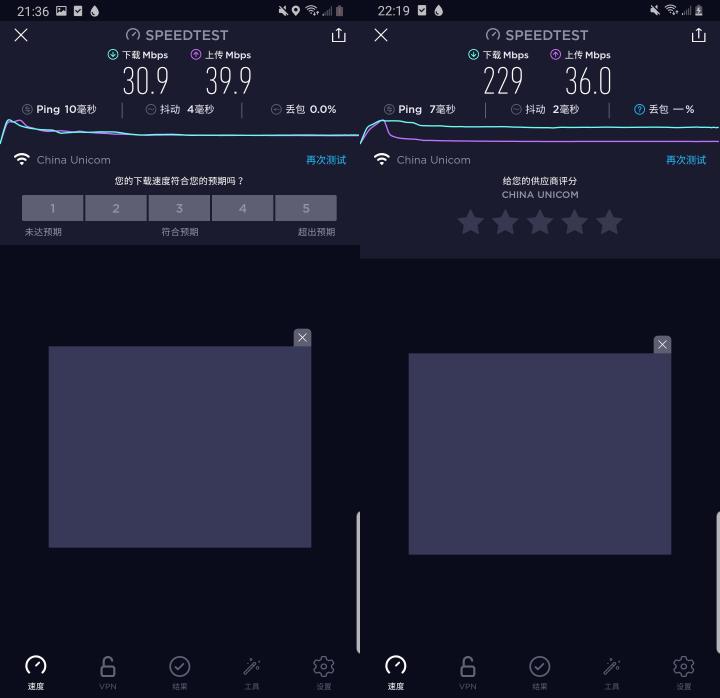 The results of MacBook Pro 13 (not supporting WiFi6) on the old and new routers are: download 249Mbps-19.5Mbps, upload 35.6Mbps-18.2Mbps, delay 7ms-7ms, also in Mac system, even if only WiFi5 is supported, the speed of 230Mbps is also Leave the old routers unmatched.

Finally, the QNAP TS551 NAS (wired connection) write test. Under the Gigabit Ethernet port, the speed of the new router is 62.8MB/sec, and the speed of the old router is 6.35MB/sec. It used to take about three minutes to copy a 1G material, but it only takes more than 10 seconds to connect to the Gigabit Ethernet port of the 360 ​​WiFi6 whole house router.

In summary, whether it is a WiFi6 device or a WiFi5 device, or even a wired connection, the 360 ​​Skydome router that supports WiFi6 is really an old optical cat's own router. Now think about how awkward I used to be. The difference in download speed is about 10 times. This test result has to make me say that WiFi6 is really fragrant, and the 360 ​​router for 500 yuan is also very fragrant!

The performance party can skip this link, and the face value party can continue to look at the appearance of this router. 360WiFi6 whole house routing package adopts 360 classic greenish color scheme, after all, green represents safety. In order to be safe, life has to be green. 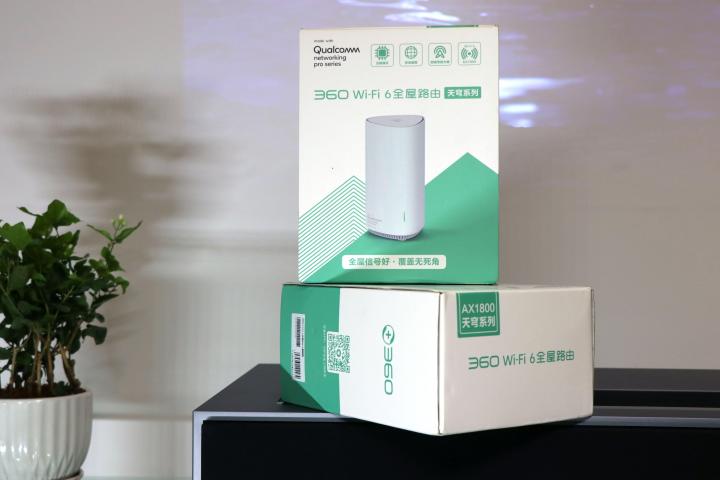 The shape of the router is a rounded triangular prism, and the azure color of the body is pretty good, no matter where it is placed, it does not violate the skin, and the skin-like shell feels comfortable (but I don’t play with routers, emmm is also an advantage) . There is a vertical indicator light at the bottom of the front of the router, which can show the status of the router. There is a Qualcomm logo on the side of the router, and many players who play routers recognize the Qualcomm processor logo. Fortunately, the 360 ​​WiFi6 router is equipped with Qualcomm's IPQ6000 processor, which is positioned at the enterprise level. It has 4 A53 cores and 1 1.5GHz network acceleration engine core, and supports 1024QAM modulation at the same time, and the wireless rate can be as high as 1800Mbps. 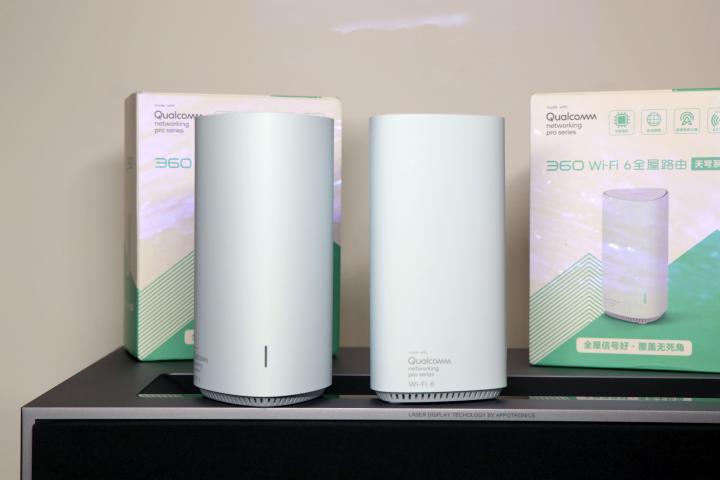 The interface is equipped with a power interface, a USB interface, and 4 Gigabit Ethernet ports in turn, and there is a reset button on the left side of the power button. The USB interface is well received. You can connect an external U disk or hard disk to build a simple small NAS, and networked devices can back up photos and watch a small movie. 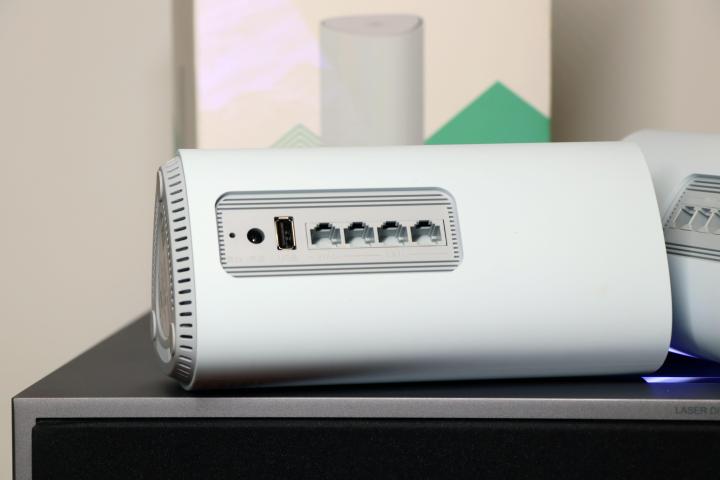 The configuration of the router is briefly mentioned, and it is a reference for the friends who buy this router in the future. If you don't want to read it, just skip the final summary. First connect a router to the network cable and power it on, connect the mobile phone to the router’s WiFi (name and password are at the bottom of the router), then download the "360 Home Firewall" APP, open it and it will automatically find the router (the app is called the home firewall, so powerful ). 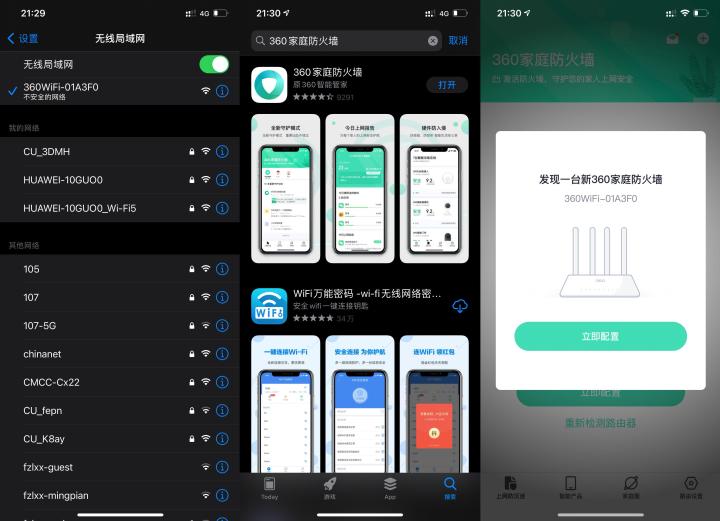 Then you can configure the router in a few simple steps in the App. Since I already have a backup configuration, the operation is easier. Of course, if you forget your broadband account and password, you can use a network cable to connect the WAN port of the old and new routers, clone and replace them. 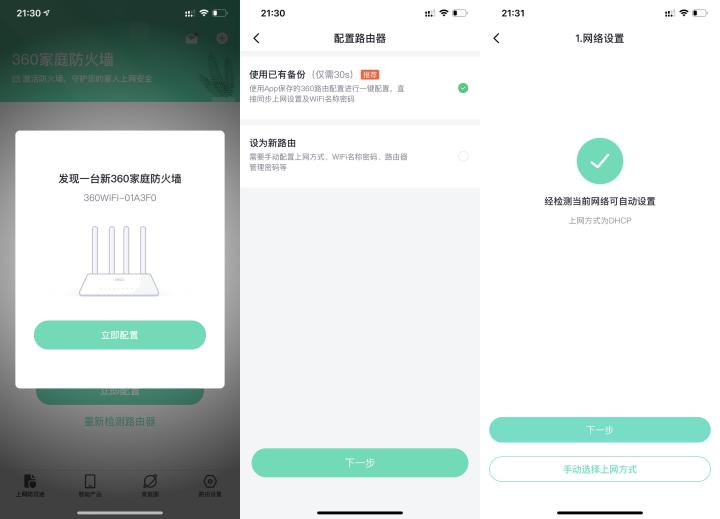 Then set the WiFi name and password, wait for the router to restart, the configuration is complete. 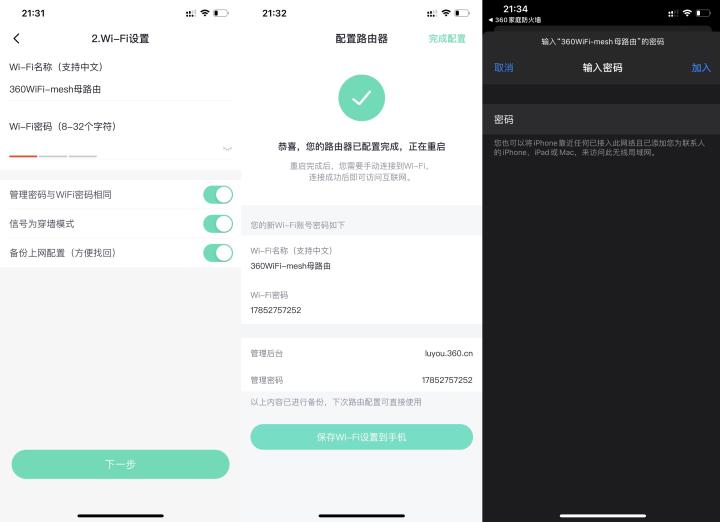 Then there is mesh networking, click Colink in the App. 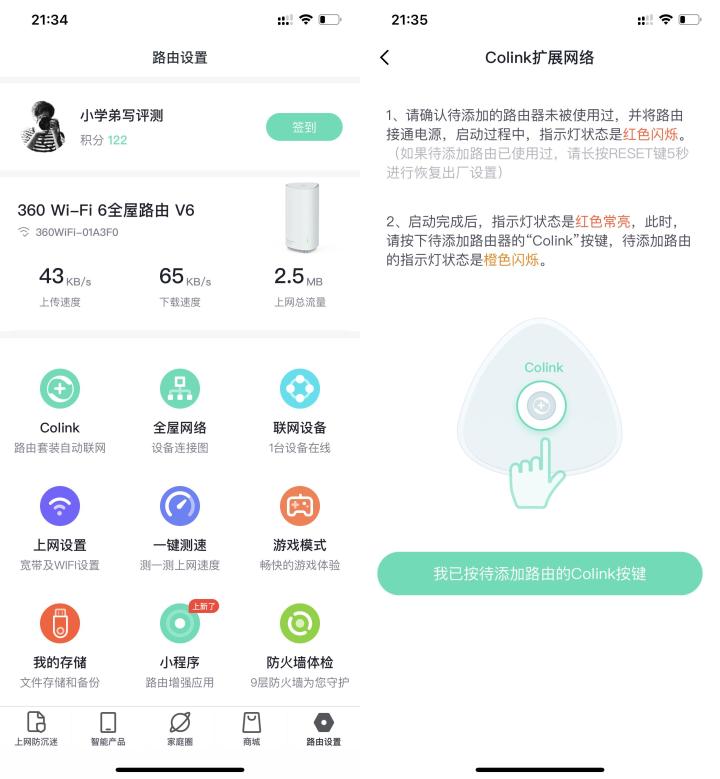 When prompted, press the button on the top of the router. 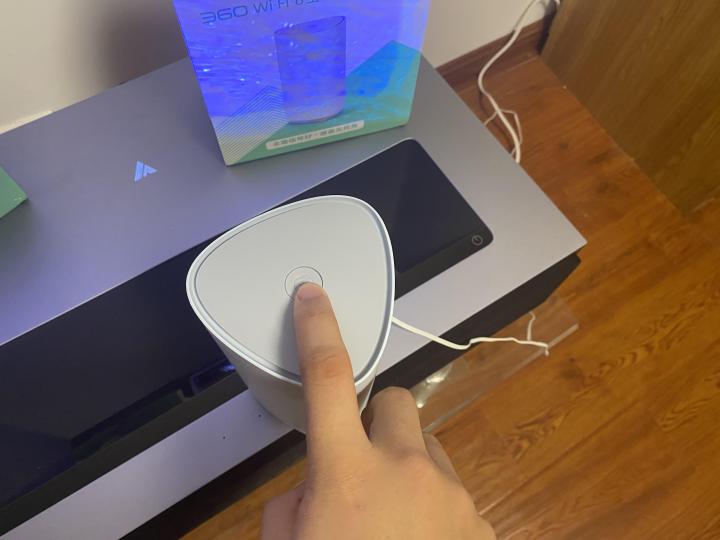 The router will search for nearby routers and pair them automatically. When the indicator light changes from green to steady on, it means the networking is complete. 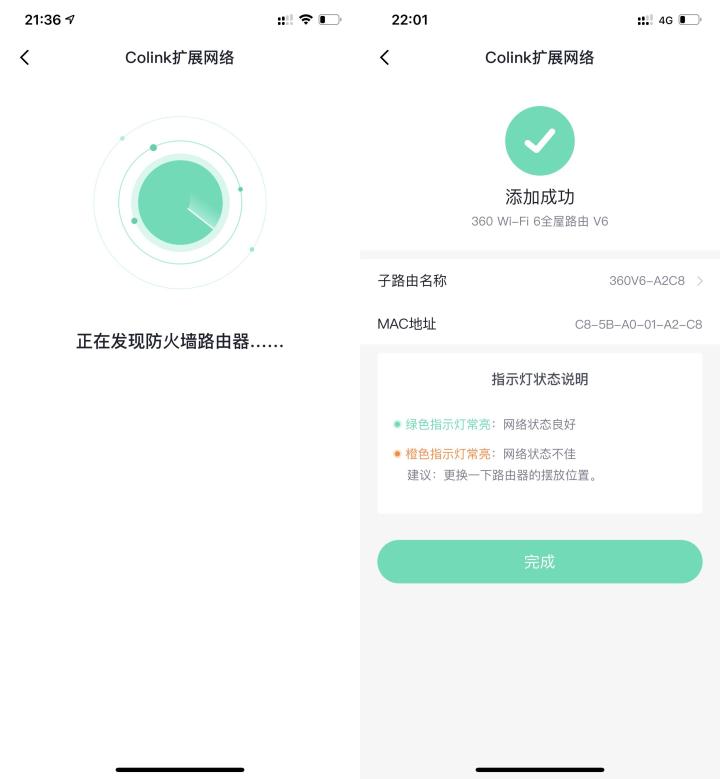 Up to now, I am still pleased that I chose WiFi6+Mesh when upgrading my network equipment. This is a powerful combination that can achieve high network speed and low latency while covering every corner of the home more comprehensively. While the effect is 1+1>2, the cost is <2, 1 cent and 1 cent, 2. Divides the money for 5 cents. The 360 ​​Skydome series routers are such a device. The special functions of cloning and replacement and firewalls are extra points in experience. Finally, there are shopping suggestions. If there are places in the home where the signal is poor and there are WiFi6 devices, listen to the younger brother, WiFi6+Mesh, and you are done!